This arcticle is very short and possibly as regards content still incomplete. Please help us: Sign up or log in, edit and complete the article and remove this note afterwards. (Editing help.) 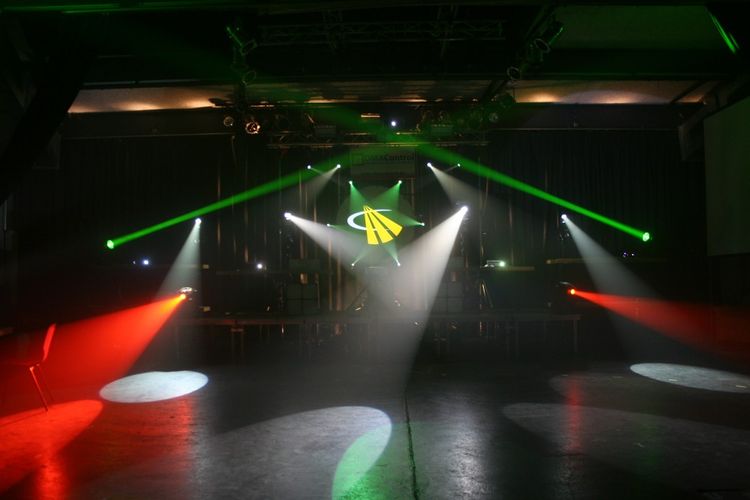 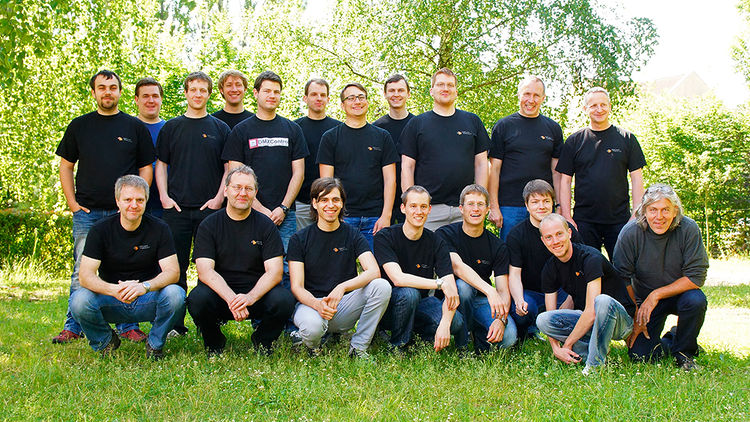 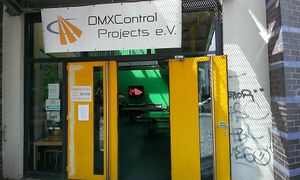 With our this year's assembly we celebrated our 10th anniversary. Around 20 people made their way to K14 in Berlin, our tradition club.

At the first day it was raining cats and dogs, but Wolfgang brought his own sum with him, which obviously motivated the real sun to shine more - but that wasn't our intention, so we used unfair methods (curtains) to keep it out of the building.

As we were afraid of the time because of the planned open house, the first people arrived at wednesday, so they could start preparation early. So we had enough time to get to know Moritz, who programmed the Raspberry Pi based Beamertool. Maik prepared some Raspperries as Hoc was planning a show with it. 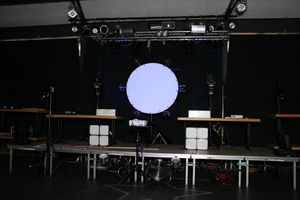 Final stage with our equippment 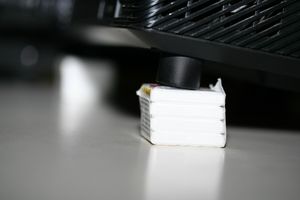 Height adjustment of a videoprojector 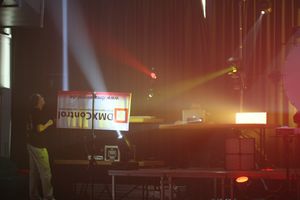 fineadjustment of the lightshow; or banner is used as screen for the Beamertool 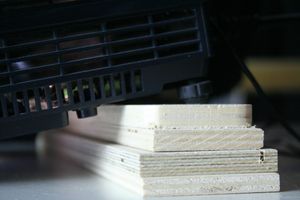 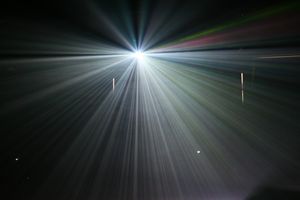 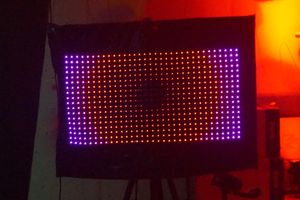 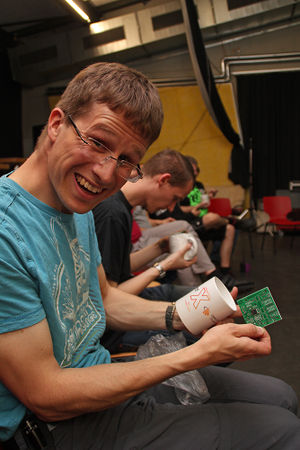 Hoc looks at his present

The day started building up our stuff at the stage. Our FOH had a width of four metres and - as it included a digital audio desk, a video desk, four computers for lighting and one light desk - looked quite professional.

At stage we placed five video projectors. Each one had an Art-Net controlled Rasperry Pi placed directly behind it.

Late afternoon Frank opened the assembly, supported by a video message from Arne and a video review from Marten. All three reminded us at the great activities of the last ten years. In his talk »history in mind - future in focus« Arne draw a great future for the project. Frank drew our focus to the early beginning of DMXControl with the Hosh- and Albatros-Show, and was exited to hopefully see an at least linear increase in profesionality.

In the evening, Stefan K. held a presentation with his LED matrix based on WS2812-LED-Stripes. The matrix is controlled by a self written Art-Node with Art-Net from DMXControl (or other matrix software), and consists of 594 RGB LEDs (33 x 18 pixels), so uses nearly four DMX Universes.

Julien presented his developed RGB Lamp with DMX, USB and Bluetooth connectivity. Currently the price is a little high, but components are getting cheaper by time.

Tom from Salzburg (our guest from far away) brought a OLA-installation with him and presented it to us. He sadly pointed out, that the DE-Interface and Noodle aren't supported, and maybe he will bild up a DMX Community in Austria. 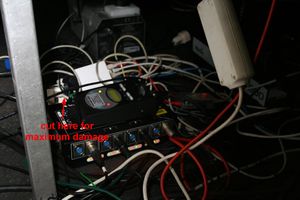 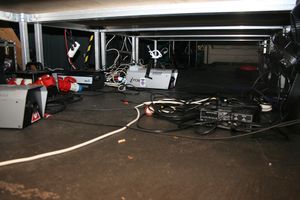 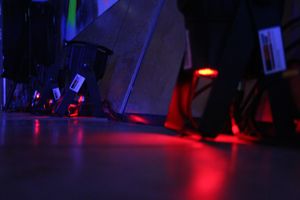 LED fixtures for wall washing, waiting for their cue 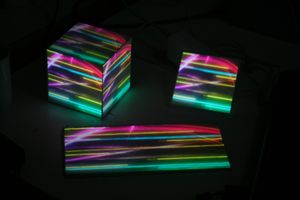 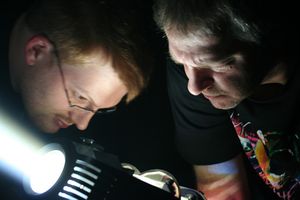 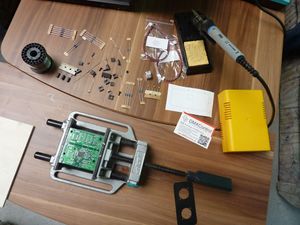 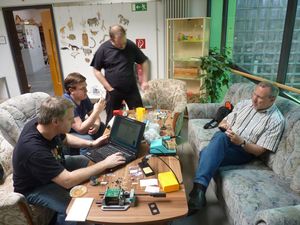 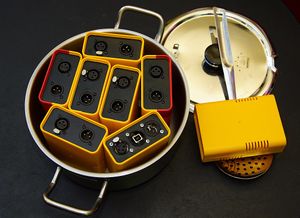 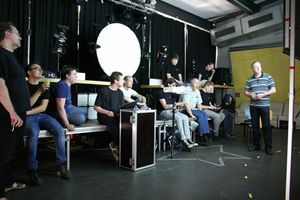 After Breakfast we took the obligatory picture of the club members and guests.

Then we used all spare time to adapt and fine tune saturday's light shows to the room and more and more staged fixtures. Other members extended their electronic knowledge building a noodle interface with Wolfgang and Dirk, so nearly every member now owns such a DMX interface. In the evening we had Nodle soup to be strong for the next day.

After lunch we held telephone conferenze with Arne. He sadly remarked that he's in china and can't attend our meeting. He wanted to be informed in detail - sadly he had to be satisfied with pictures and videos. He shortly talked from his China visit. Accidentally he stubled across a caraoke bar using DMXControl 2, so we set him in charge with building up the chinese DMXControl Community. In the end we discussed about DMXControl 3 with Dennis.

After supper Patrick presented us DDFCreator 3 and his further development, we discussed about different details like descriptions in the software. Aferwards Stefan K. presented the different editions of DeskLamp (white, RGB, USB-Adapter).

After we repaired the shutter of a moving head, we again rehearsed and finetuned the lightshows multiple times, and finally recorded them on video. 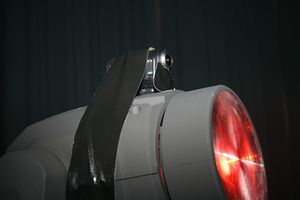 Special construction for videotaping the lightshow 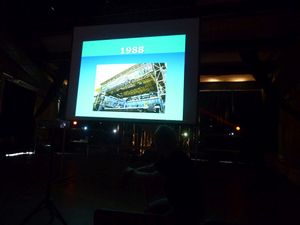 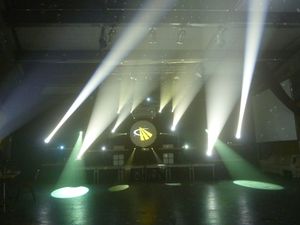 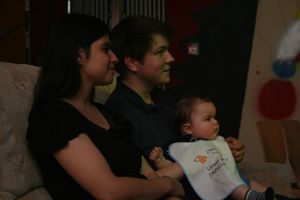 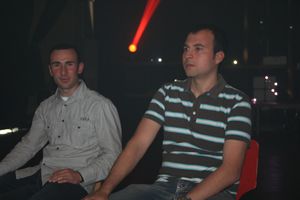 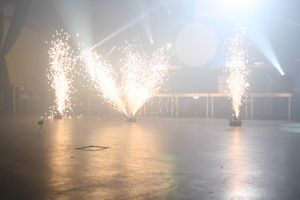 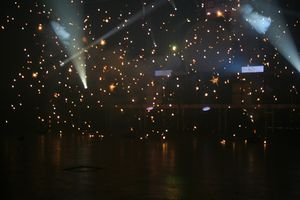 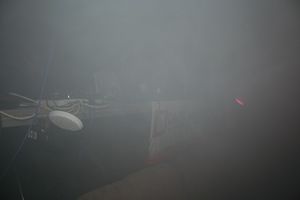 FOH from one meter distance 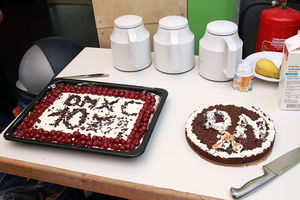 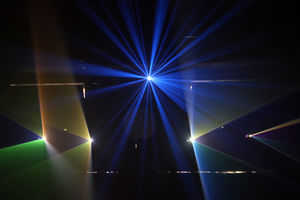 After a short breakfast we alread had our first guests, getting shown our lightshows. They complimented us and we talked shop about details. Following Peer Franke von Avantgarde held a talk about his beginning with light engineering with the east germany band Karat. He later was responsible for conerts with over 100,000 visitors and bands like Bruce Springsteen, Joe Cocker et ecetera. He told us about often very improvized equipment and difficulties to buy new equipment.

In the afternoon we had Clemens and Roman from Pyro Art as our guests. They seemed a little disapointed that they couldn't impress us with their 3000 W fog machine, and so left it in their car. The Ramptec AeroFlamer draw more attention to them, so they showed us the devices functions and safety precautions (e.g. the tilt detection). Additionally they explained basic safety regulations for fireworks and developed the integration of fireworks into one of our lightshows. The result was really one of the peaks of the history of the association. Thanks to Jens-Peter and Christian for the preparation of those mind blowing shows. It wasn't a linear but an exponential increase of quality! Videos can be found at the end of this article.

The meeting was so motivating, that we recieved two new membership applications.

In the evening we tested the capabilities of the fog machines. Measuring the visibility range using a laser distance meter pointed into the fog resulted in 0,335 meters.

The evening faded with a funny and atmospheric party, moderated by DJ Maik.

Just before we started dismounting, we had fun watching the lightshow from the perspective of a movinghead - also see the picture of our special construction.

Within our guests we had Mr. Mahler from Papiertheater, who uses DMXControl regularly and attested high stability. Sadly we got visited by less DMXControl community members than we expected, but of course we presented the light shows to our guests and attending K14 regular guests.

Tally sheet for the shows: 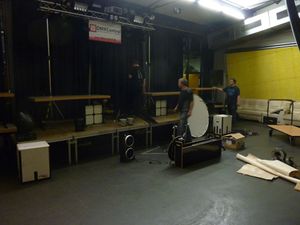 Dismounting - and you can't find a trace left!

In short: Putting all the stuff back into our cars and cleaning up

Detailed connection of the fixtures

logical and electrical connection of the used fixtures